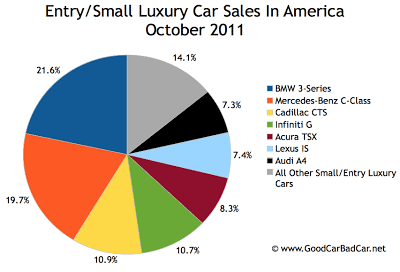 BMW 3-Series slid 9% in October 2011. The drop in volume of America’s best-selling premium car wasn’t significant enough for the Mercedes-Benz C-Class to grab top spot in the small luxury sector, even with the C-Class’s huge 88% jump. C-Class sales are up 7% through the first ten months of 2011.

Moreover, C30 sales are down 17% this year. Volvo’s good news is S60-centred. Sales of Volvo’s most eye-catching current car are, at the very least, decent, and at most, 2519% better than S60 sales were last year.

Details on October U.S. sales of midsize luxury cars can be viewed after the jump.

Note: The Lincoln MKZ has moved below to the midsize luxury car group. Some larger cars remain in the small/entry segment breakdown, but that’s mainly because their price and mission are more directly comparable to that of the class-leading BMW 3-Series. 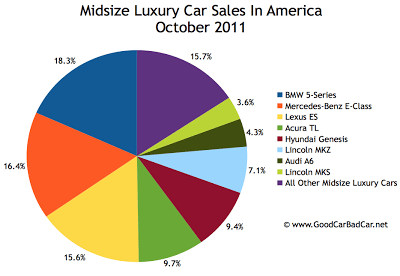 Of the 17 cars in the midsize luxury car table below which could have posted declining year-over-year sales, 12 did so. Worst among these declines was the Acura RL’s, a 91% plunge. Acura RL sales are off by 42% in 2011.

The Mercedes-Benz CLS-Class was an aging car last October. The new model has helped Mercedes-Benz post a 192% year-over-year increase in October 2011. The CLS finished October 108 sales ahead of the Audi A7.

Leading the overall segment in October was BMW’s 5-Series. Normally, Mercedes-Benz’s E-Class is the leader of the pack, but E-Class sales dropped 19% in October.

Source: Manufacturers & ANDC
Note: the Lincoln MKZ has moved in to the midsize luxury car group. Some larger cars remain in the small/entry segment breakdown, but that’s mainly because their price and mission are more directly comparable to that of the class-leading BMW 3-Series. The MKZ comes across as more of a competitor for the Lexus ES than the Lexus IS.