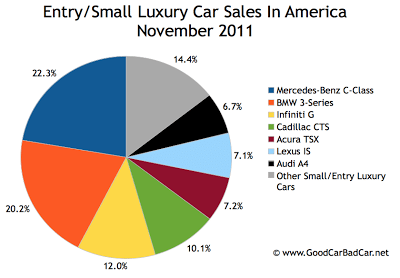 Since July, U.S. sales of the Mercedes-Benz C-Class have increased each and every month. August was 4% better than July, September sales grew 45% from August levels, October sales jumped 3%, and November was up a further 18%. Compared with November 2010, C-Class sales last month more than doubled to 8358. The small Benz sedan/coupe duo was America’s best-selling luxury vehicle overall, beating its nearest direct rival by 790 units.

While all that C-Class news sounds wonderful, consider the fact that the BMW 3-Series, the aforementioned direct rival, is now an outdated model. The terrific new F30 3-Series sedan will arrive in showrooms soon, at which point 3-Series sales will spike. The C-Class’s recent improvement suggests customers in this segment aren’t all willing to wait for the new 3-Series. Even so, 3-Series sales were healthy enough in November to make it America’s 20th-best-selling car.

Check out last month’s version of this post here and find monthly and yearly sales figures for all these vehicles by accessing the dropdown menu in the top right of this page. Keep scrolling for a look at November’s U.S. sales data on midsize luxury cars like the top-selling Mercedes-Benz E-Class, failing Acura RL, fast-rising Audi A6, and the dying Cadillac STS.