A month ago Audi produced sales results that showed the dramatic A7 to be more popular than the conventional A6. Or so the longer line on the chart led you to believe.

In reality, the story at Audi is the same as the story at Mercedes-Benz. Now that the fourth-generation $41,700 2012 Audi A6 has taken over from the third-gen car the A6 appears to have taken back its proper position, out-selling the A7 by 305 units. Sales of the eye-catching A7 actually slid 8.2% from May; A6 sales jumped 89.9% during the same period.

Over at Mercedes-Benz, the already-established W212 E-Class sedan/coupe/convertible/wagon family found 5114 buyers in July. The second-generation CLS-Class four-door “coupe” was up 657% year-over-year but Benz’s A7 rival is still out-sold by its E-Class sibling seven-to-one. It was also out-sold by the A7 in July.

As for the 1103 A6 and A7 sales Audi found that the company’s American division didn’t possess in July 2010, well, that still wasn’t enough to make the Audi midsizers the dominant force in their U.S. showrooms. The A4, by itself, out-sold the A6 and A7 by 551 units. 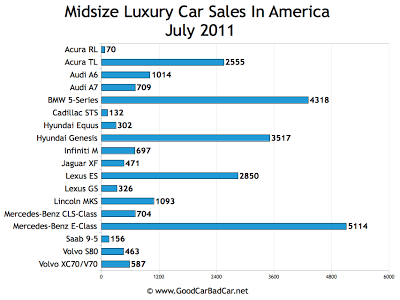 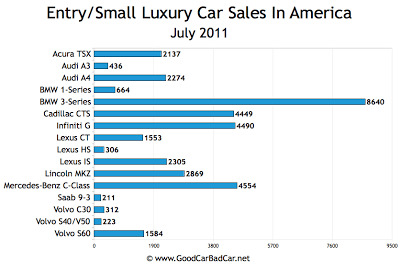