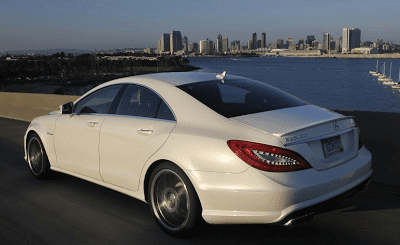 2012 will mark the first full year of luxury four-door coupe sales engagement in the United States. The second-generation Mercedes-Benz CLS-Class was not able to keep up with the all-new Audi A7 at the end of 2011 and the Audi finished the year with a 605-unit victory. January 2012 began with another victory for the Audi A7. With eleven months remaining, the Mercedes-Benz CLS spotted the Audi A7 61 sales.

Among more mainstream luxury sedans, Mercedes-Benz secures a victory with the E-Class nearly every month. It helps that Mercedes-Benz comes to a knife fight with a gun, knife, sword, and pepper spray (via the E-Class sedan, E-Class coupe, E-Class convertible, and E-Class wagon) when others show up in sedan form only. But don’t use that to underestimate the E-Class’s popularity, even when sales fall 14% year-over-year.

The second-best-selling midsize luxury car in America, BMW’s 5-Series, was down 26% in January 2012. Only the awful Bad 8-losing Acura RL, the Lexus GS – still waiting for the next-gen car – and the dead Cadillac STS fared worse than the BMW when compared with sales from January 2011.

After the jump you can find detailed sales figures and an accompanying chart for smaller and less expensive luxury cars, including America’s favourite premium vehicle, the BMW 3-Series. Sales figures for all these vehicles – monthly and yearly, U.S. and Canadian – can be accessed through the dropdown menu at the top right of this screen or on the Sales Stats page. 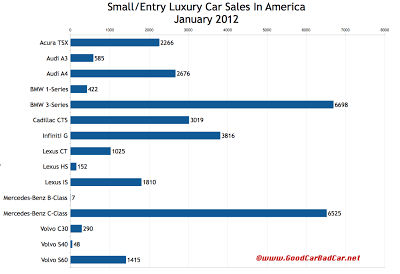