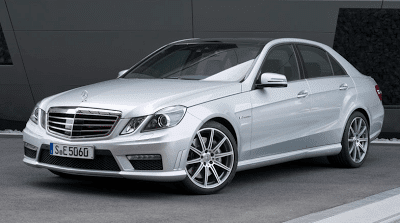 Mercedes-Benz E-Class sales were in decline last month but the default midsize luxury choice still ended August 2011 ahead of its competitors in terms of overall U.S. sales volume. The E-Class was down 4%; the second-ranked BMW 5-Series was up 41%. The E-Class beat the BMW by 1334 sales, a margin which was greater than Infiniti’s total M37/M56/M35h volume.

Together, combined sales of the Acura RL, Audi A6, Audi A7, Cadillac STS, Hyundai Equus, Infiniti M, Jaguar XF, Lexus GS, Saab 9-5, Volvo S80, and Volvo XC70 didn’t measure up to the volume put up by the Mercedes-Benz E-Class with its sedan, coupe, convertible, and wagon derivatives in August 2011. The E-Class is Mercedes-Benz USA’s best-selling vehicle. Through the first eight months of 2011 sales are up 9% to 42,702.

Keep in mind, although many of these cars are offered in more than one bodystyle, Hyundai Genesis sales figures include the much less expensive Genesis Coupe. If Canadian figures are anything to go by, the Genesis Coupe is worth eight out of every Genesis sales. And if that were the case, the Genesis sedan would appear in the chart below with something like 650 sales, which actually wouldn’t be a bad number for an upstart mainstream brand attempting to steal sales from the (less popular) Jaguar XF, Lexus GS, and Volvo S80. 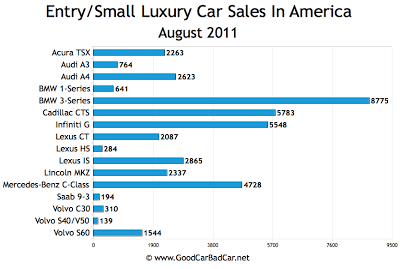 Nearly 41,000 sales are represented in the above chart. Many of these cars are larger than small; many are smaller than some of the small luxury cars. All wear aspirational logos and fight in a similar price category. There’s a pretty good chance if you know of a car buyer who’s looking to purchase one of the 16 listed cars they’ll end up choosing between 25% of the available options. 61% of the sales GoodCarBadCar.net filters into the small/entry luxury car sales chart were reported by the BMW 3-Series, Cadillac CTS, Infiniti G, and Mercedes-Benz C-Class.

Together, those four cars accounted for 176,131 sales in the first two-thirds of 2011. In August standings they were America’s first, third, fifth, and sixth best-selling premium vehicles. BMW 3-Series sales rose 5% in August. The CTS was up 39%. Infiniti G sales moved northward at a 2% clip. The C-Class Benz was down 22.5%.