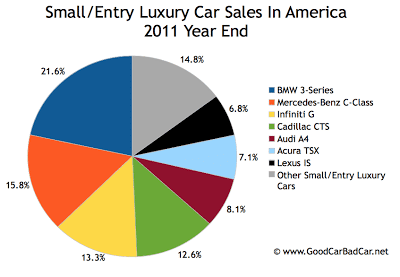 All around the world, the luxury car sales race is a race for second place. It’s like Michael Schumacher in 2004. He won twelve races in his Ferrari that year. It was boring, yet incredible. Rivals were competing for second spot on the podium.

The BMW 3-Series is America’s most popular luxury vehicle, and thus quite obviously the best-selling smaller premium car, as well. Sales slid 15.7% in December, a final waivering moment in a year when sales slid 6.5% as customers waited for the better F30 3-Series. The 3-Series beat its nearest direct rival, the Mercedes-Benz C-Class, by 25,000 sales. This was in a year that was, by C-Class standards, very good, a year which was invariably a bad one by 3-Series standards.

In other battles, the Lexus CT200h manhandled the Lexus HS250h. Audi’s A4 lost the race for fourth place to the Cadillac CTS, which lost the battle for third place to the Infiniti G. Volvo’s S60 won the Swedish competition by beating the Saab 9-3 by more than 17,000 sales. As if that fact surprises a single reader. The BMW 1-Series out-sold the Audi A3 and Volvo C30 yet still ended up on America’s worst-selling vehicles list.

For a look at the U.S. sales results of slightly larger, more expensive cars – both for December and 2011 year end – click past the jump for market share charts and another table full of numbers. 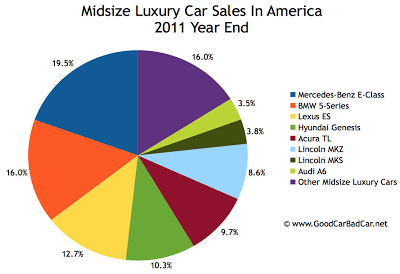 In the loosely-defined midsize category (does the Acura TL’s price make it a competitor in the table above, does the Hyundai Equus’s size make it a competitor in the large luxury car segment?) the Mercedes-Benz E-Class came out ahead of the rising BMW 5-Series with an 11,000-unit victory. The four-door coupe class went Audi’s way, however, as the A7 topped the CLS-Class by 605 sales.

The Swedish elites were in rough shape in 2011. The Volvo XC70 ended the year down 13.7%. The Saab 9-5 just got going when things stopped… er, going. Both the 9-5 and Volvo S80 made appearances on America’s worst-selling cars list. As did the Acura RL. The RL and Lincoln MKS made even worse appearances in GoodCarBadCar’s Bad 8.

This segment will be changed in 2012 with the addition of Cadillac’s XTS and Lexus’s next GS. Then again, we thought the latest Infiniti M would have an impact. It hasn’t. The XF hasn’t been able to lift Jaguar out of the bit-player basement. On the less-expensive end of the ledger, Lincoln has introduced a new MKZ. It’s unique. As of 2011, the MKZ is nowhere near as popular as the Cadillac CTS. And the CTS will be gaining a little brother soon, the handsome (but very little) ATS.

If cars were purchased based on their names, most of the cars in these two tables would never be acquired. TL, M, ES? MKZ, S80, A7? Equus beats them all.