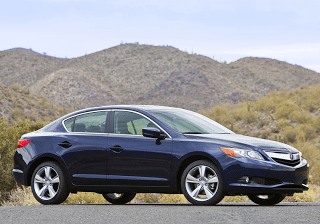 Late last month GoodCarBadCar ran a couple of posts which highlighted the volume differences between Lexus, Acura, and Infiniti as well as Mercedes-Benz, BMW, and Audi. The chart below throws all the premium brands into one pot for a U.S. May 2012 market share comparison.

The year-over-year changes for brands like Lexus, Acura, and Infiniti were expected to be grand. Lexus gained nearly five percentage points; Acura nearly three; Infiniti more than two. There were very few Japanese luxury cars on U.S. dealer lots in May of last year as a result of the March 11 Tōhoku quake. Year-over-year volume at Lexus, Acura, and Infiniti had fallen 45%, 24%, and 21%, respectively. That these three brands would sell more cars in May 2012 and own a larger portion of the U.S. premium car market was basically automatic.

Perhaps a more appropriate market share comparison would stand the numbers from the chart below up against figures from April 2012. Lexus increased its share from 14.2% to 15.7%. Acura moved from 9.9% to 10.7%. Infiniti posted a two percentage point increase, rising from 5.8% to 7.8%. Month-to-month market share declines were reported by Audi, BMW, Cadillac, Jaguar, Land Rover, Mercedes-Benz, and Porsche.

Historical monthly and yearly sales figures for the vehicles sold by all these brands can be accessed through the dropdown menu at the top right of this page or at GoodCarBadCar’s Sales Stats home. Of the 136,349 sales represented by the pie slices in the chart below, 7.8% were Lexus RX crossovers. Another 9.1% were 3-Series and 5-Series BMWs. For the first time since December, the RX was America’s best-selling premium vehicle.