Of the 4761 large luxury sedans sold in the United States in October, very nearly two-thirds were German. Audi’s share of the market stood at 8% in October 2011 as sales jumped 991% from the same period last year. Despite the significant increase, Audi’s new A8 is still the least popular car in its class.

At the top sits the Mercedes-Benz S-class. Sales of the biggest Benz, nearly 10,000 of which have been sold this year, fell 48% in October, however, making way for the BMW 7-Series. 7-Series sales jumped 62% in October but are down 15% this year. But the 7-Series wasn’t the class-leading car in October 2011, either.

October 2011’s large luxury crown is worn by the Lexus LS. Sales of the LS sales were down, but only by 16 units. That’s a much better performance than Lexus has achieved on year-to-date terms, as the big Lexus has struggled since Japan’s March 11 earthquake. Year-to-date LS sales are down by 1931 units. Lexus owned a quarter of America’s large luxury car market last month, a fact which is very visible in the chart below.

Keep scrolling after the jump for a look at more detailed sales figures on large limos and large luxury sport-utility vehicles. 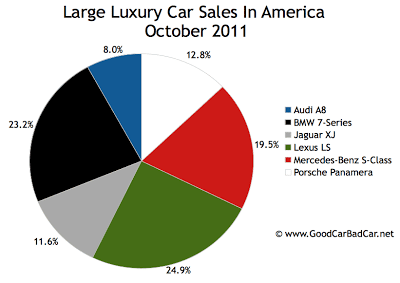 Mercedes-Benz’s S-Class may have struggled in October, but the GL-Class did not. Sales of the seriously capable Benz were up 13% last month and have improved at a 22% clip through the first ten months of this year.

At Lexus, the company’s GL-Class-rival was way down from what was an already low-volume October 2010. LX570 sales are down 14% this year but slid 34% in October even as the brand’s LS limo regained control of its segment. 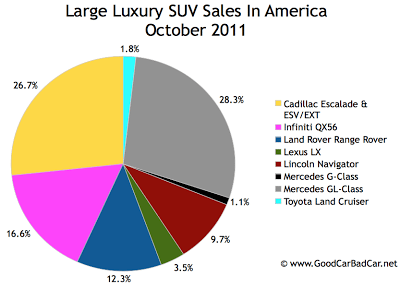