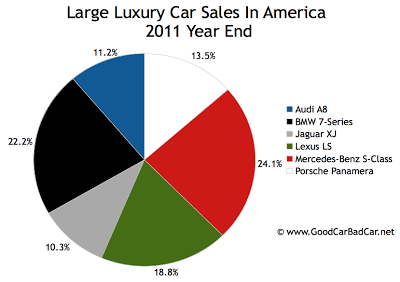 Although December’s leadership trophy was handed to the BMW 7-Series, America’s large luxury segment was, in total volume terms, led by the Mercedes-Benz S-Class in 2011.

2010’s second-place Lexus LS dropped to third spot behind the 7-Series. Sales of the four leading cars all slid in 2011. The Lexus LS’s drop was the worst, but Porsche Panamera sales fell 11.1% to 6879, not much better than half what Porsche was able to achieve with the Cayenne SUV.

The 50,939 sales achieved by the six cars in the category (excluding the similarly vast but much less expensive Hyundai Equus) mean overall large luxury car sales fell 1.4% in 2011 despite the Audi A8’s monstrous year-over-year increase and the Jaguar XJ’s notable gains.

Large luxury SUV sales results for December and 2011 as a whole can be viewed further down the page. Make use the dropdown menu at the top right of this page to find historical sales figures for all these models and every car, truck, and SUV currently on sale in North America. 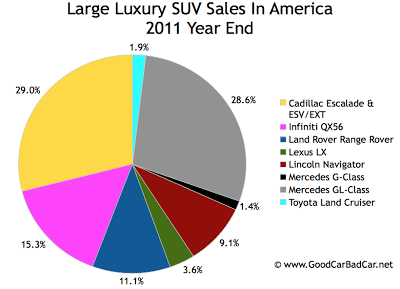 Its 329-unit lead over the Cadillac Escalade at the end of November wasn’t solid enough to deliver victory to the Mercedes-Benz GL at the end of the calendar year. Admittedly, Cadillac has three Escalades with which to do battle.

The best-selling Escalade is the regular-wheelbase ‘Slade. With 59% of the sales, that Escalade’s 15,079 are good enough for second place among jumbo lux sport-utes, but not nearly enough to fend off the Mercedes-Benz GL-Class. All three Escalade family members suffered year-over-year declines in December and in 2011. The Avalanche-based Escalade EXT was down just 1.5% in December and just 2.2% in 2011.

Compare that with Mercedes-Benz’s significant year-over-year boosts. The G-Wagen was up 29.6%, the GL-Class climbed 26.1%. This all occurred in an overall market which grew 10.3%.