3739 large luxury cars were sold in the United States in January 2012. That’s a 2.4% rise from January 2011’s total, despite the fact that two-thirds of the nameplates in the category saw their volume shrink, and rather dramatically in three cases. America’s overall new vehicle market rose 11% in January.

Most interesting are the drops reported by the Audi A8 and Jaguar XJ. Upon testing their most recent incarnations, many auto reviewers thought these were the cars with which Audi and Jaguar could finally break the Mercedes-Benz/BMW/Lexus juggernaut. It’s early, only one month into 2012, just after the A8 and XJ reported 275% and 22% year-over-year gains in 2011, but the big Audi and chic Jaguar suffered alongside the Lexus LS in January. Mercedes-Benz S-Class sales dipped 2%, a scant 15-unit decline.

After the jump you can find sales figures for the more popular large luxury SUV category. The Cadillac Escalade squeaked out a victory over the Mercedes-Benz GL-Class, although it needed the ESV and EXT’s help to do so. Combined, sales of the three Escalade bodystyles fell 28% in January – the regular wheelbase ‘Slade was down 35%. Sales figures for these models and every other nameplate on sale can be found by accessing the dropdown menu at the top of this page or at GoodCarBadCar’s Sales Stats home. 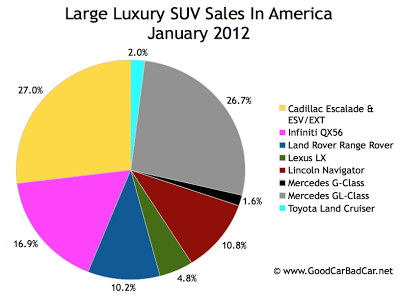