Four of the six major luxury limos competing in the United States have reported falling sales this year. Three of those cars also failed to match November 2010’s volume one year later. Sales of the Porsche Panamera slid 17% in November 2011. After topping the segment last month, the Lexus LS dropped 25% year-over-year, 20% from October’s 1186 sales. Jaguar XJ sales are up 21% this year but fell 33% last month.

The Mercedes-Benz S-Class was America’s most popular large luxury car in November. Sales jumped 23%. The aging S-Class is down 12% through the first eleven months of 2011 yet leads the segment in spite of its decline. The Hyundai Equus’s price point positions Hyundai’s gigantic sedan against midsize luxury cars like the Mercedes-Benz E-Class, but in case you were too curious to wait for that post, you can find Equus sales figures here. Hyundai sold 300 in November, the Equus’s second-best month yet.

Keep scrolling for a look at the U.S. sales figures of large luxury sport-utility vehicles. For context, check out last month’s version of this post.

No large luxury SUV reported as nasty a decline as the ultra-rare Mercedes-Benz G-Class. Sales of the $107,100 G550 and $124,450 G55 AMG fell 48% in November. On the flip side, Mercedes-Benz’s less expensive GL-Class was the most popular large luxury SUV in Americal as sales jumped 54% last month.

As individual vehicles, the regular-wheelbase Cadillac Escalade was down 5% to 1274 in November 2011. Sales of the long-wheelbase Escalade ESV rose 2% to 777. The Escalade EXT, also featured in America’s pickup truck sales chart, was down 0.5% to 196 units. 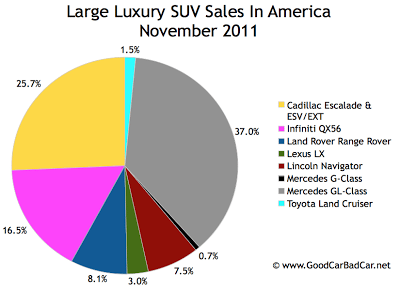