Sales of the Audi A8 and Mercedes-Benz S-Class improved year-over-year in July 2011. Every other large luxury car featured in the chart you’ll see below suffered some pretty dreadful declines.

At this time last year the Audi A8’s market share in America was a paltry 2.8%. A year later the new A8 helped Audi own 12.4% of the large luxury car market.

GoodCarBadCar.net lists the Audi Q7 with more natural rivals like the Mercedes-Benz M-Class and BMW X5 in the midsize luxury SUV section. As is the case in the big luxury car category, Mercedes-Benz is a dominant player in the the large luxury SUV segment. Where the car market is very evenly split, however, Mercedes-Benz and Cadillac grab the vast majority of SUV buyers who want something big and bold.
Over 7000 of these big brutes were sold in America in July. More than one-third of them were GL-Class Benzes. Just under a quarter were Cadillac Escalades. 605 of those 1676 Escalades were extra-long ESVs. 171 were Avalanche-based Escalade EXTs. 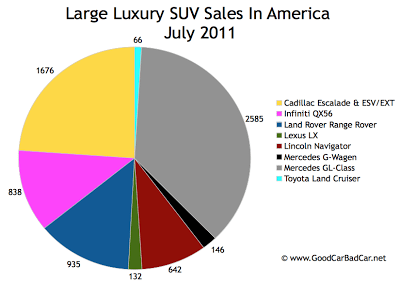