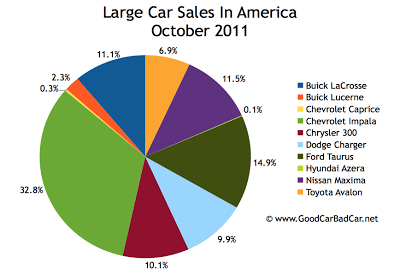 33% of the cars in the U.S. large car sales table below are Chevrolet Impalas. It’s an unfair comparison for many of the Impala’s relatively indirect competitors. The Impala’s base price is a Camry-baiting $25,645 while many of the cars in this group operate with base prices closer to or above $30,000. The Camry’s big brother, Toyota’s Avalon, is one such car. Its base price of $33,195 is at the very least semi-premium. So Chevrolet sells boatloads of Impalas to buyers who want a cheap big car – that’s the story, as always.

Obviously there is one more glaring fact manifested by the October 2011 rundown of big car sales in America. Out of a possible 18 places where red font – an indicator of declining year-over-year sales – could make itself apparent, there are 14 such appearances. It’s not surprising to see the half-dead Hyundai Azera and defunct Buick Lucerne way off last year’s pace. But Ford Taurus sales are down 10% this year. Buick LaCrosse sales were down 9% in a month in which Buick posted a 7% drop. We keep waiting for the revamped Chrysler 300 and Dodge Charger to make gains but they keep reporting losses.  The Nissan Maxima had a decent October but is off 6% this year despite Nissan’s brand-wide 18% boost.

America’s new vehicle market was bigger this October than last, so it may be safe to say big car buyers are choosing slightly smaller vehicles these days. Or they’re opting for premium-badged cars, sales of which are just fine thanks. Or maybe increasingly common crossovers are exercising sway. Regardless, sales are down, and evidence of that fact can be clearly seen in the table below, one which taps into more auto sales data than GoodCarBadCar’s previously… er, tapped.

As you’ve probably already read in October’s U.S. small and midsize car sales posts, GoodCarBadCar has changed things up with October 2011’s charts and segment-by-segment breakdowns. The table below provides more info than any of GCBC’s charts ever have, and the market share chart above (click it to make it bigger) manifests the dominance of the best-selling midsize cars in the United States.