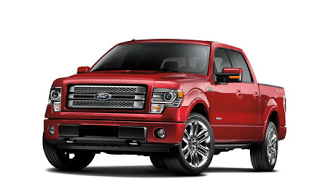 It has become routine for the Ford F-Series to outsell the combined GM twins. In the first half of 2012, it did so by nearly 19,000 units. Chevrolet Silverado sales barely increased in June 2012; the GMC Sierra was up only by a narrow margin. The overall new vehicle market grew by around 20%. Ford F-Series sales jumped 11%, and the Dodge Ram pickup climbed 12%. New GM trucks should be a big help come winter.

The order of this top 5 hasn’t changed since last year at this time. The Ford F-Series, by itself, makes the Ford brand more popular than Kia, Jeep, Dodge, Volkswagen, GMC, Subaru, Chrysler, Ram, and every premium manufacturer of automobiles. Indeed, even the second-ranked Silverado outsells every brand from Subaru on downward.

Historical monthly and yearly sales figures for these five trucks and every other nameplate on sale in North America can be accessed through the first dropdown at GCBC’s Sales Stats home or at the top right of this page. In the F-Series section you’ll see that Ford sold more than 50,000 copies of their pickup line in three different months last year. Halfway through 2012, Ford’s accomplished that feat once again. Meanwhile, this is the place where you can scan previous best-selling truck lists.