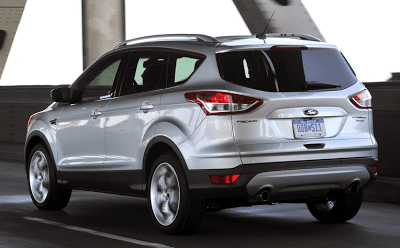 20 positions back of the best-selling Ford Escape sits the only vehicle among the top 20 most popular SUVs and crossovers to record a year-over-year decline in June 2012. And it’s about to be replaced. Hyundai Santa Fe sales were down only slightly through six months, just 1.1%. June was a particularly rough month, an ill the 2013 Santa Fe and 2013 Santa Fe Sport should cure.

Once it became clear that Escapes were flying off Ford dealer lots it was going to be very difficult for the year-to-date leader, Honda’s CR-V, to take the best-selling SUV crown in June 2012. Ford has never sold this many Escapes in a single month, and that’s saying something. The Escape has been an immensely popular vehicle for a long time. Speaking of records, Honda has never sold this many CR-Vs in any June in the vehicle’s history.

GoodCarBadCar.net has expanded this best seller list to 20 SUVs and crossovers for June 2012. These vehicles play a huge role in the North American market and do so alongside many other competitive nameplates. It only makes sense to include ten extra vehicles as more than just honourable mentions.

Historical monthly and yearly sales figures for all these models can be accessed through the dropdown menu at GCBC’s Sales Stats home or at the top right of this page. We’ve already published the 20 best-selling cars and 5 best-selling trucks from June. You can get links to those lists and other important best seller lists at the bottom of this post. Here are the 20 best-selling SUVs in America from June 2012.