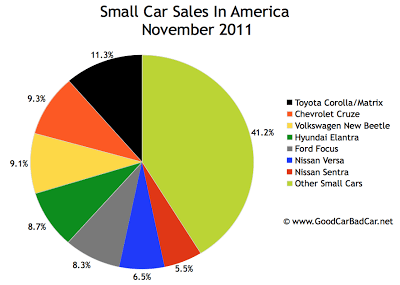 The Chevrolet HHR is very nearly gone. The Buick Verano is just beginning to arrive. One out of every 249,000 new vehicles sold in America in November 2011 were Veranos. Whether you believe the latest Buick is a competitor for the Acura TSX or the Chevrolet Cruze, the performance of another Buick – the Regal, which you’ll find in the second table below – will lead you to believe the Verano won’t have a major impact on the market. Its impact will definitely be more noticeable than it was in the latter days of November.

America’s most popular small car choice in November 2011 was the Honda Civic, sales of which rose 3%. Civic sales are down 14% this year but remain strong enough to make the Honda America’s third-best-selling compact. The Civic trails the Chevrolet Cruze by 14,367 sales and the Toyota Corolla by 18,560, deficits which will not be made up in December.

Apart from the Verano, the only other change in this month’s small car sales table is the inclusion of the Mitsubishi i MiEV. We are not close to a time when Mitsubishi could sell i MiEVs in large numbers, but expect to see a number higher than four in December’s results.

After the jump you’ll find November sales tables and market share charts for midsize and large cars. Monthly and yearly sales figures for all these cars and every other current model on sale can be accessed through the dropdown menu in the top right of this page. 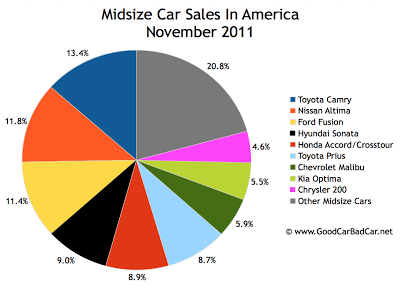 Honda Insight sales were cut in half in November 2011. Sales of the Suzuki Kizashi slid 43%. It appears as though customers who would otherwise have opted for a Volkswagen CC were tempted by the less costly Volkswagen Passat, sales of which climbed 1509% in November. CC sales fell 35% in November. The Toyota Venza was down 22%.

Compared with the Chrysler Sebring’s effort from November 2010, midsize car sales at the Chrysler brand jumped 481%. Dodge Avenger sales doubled to 5643. An even greater jump was reported at Kia: Optima sales shot up 570%. Thanks in part to the Prius family’s additional member – the Prius V – total Toyota Prius sales improved by a notable 49%. 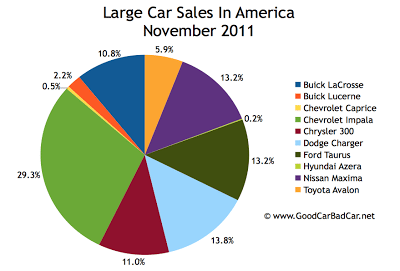 But if you really want to sell a large number of big cars you sign up with General Motors to sell Chevrolet Impalas. Clearly a fleet favourite and a value-driven purchase, the Impala is an immensely common car in the United States. Nevertheless, sales of this obviously frequent large car choice plunged 26% last month. In a market which has grown 10% this year, Impala sales are up just two-tenths of a percent.

Source: Manufacturers & ANDC
Red font indicates declining year-over-year sales
Accord sales include the Crosstour. GCBC will continue this through December for comparative purposes.
Chrysler 200 year-to-date sales include 2380 Sebrings. The 200’s September 2010 refers to the Sebring.