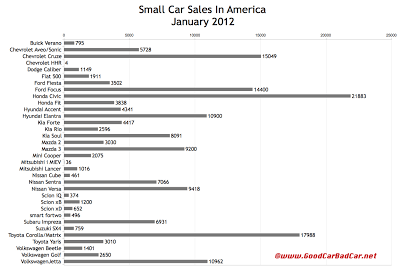 Suggesting there are easily-defined trends developing just one month into the new year isn’t unlike believing you can decipher what newborn babies are thinking. It’s just too early to tell. However, we do know certain things. Not about what the babies think, just about the whole mainstream car sales thing.

After the jump you can learn a few of these things based on midsize and large car sales results from January 2012. In the small car table you see below, there are a few stand-out facts of which you must be made aware.

Chevrolet sold 16 Aveos in January. The Mini Cooper – that’s every Mini that isn’t a Countryman – out-sold the Fiat 500 by 164 units. The Fiat 500 out-sold the Volkswagen Beetle by 510 units. The Volkswagen Beetle out-sold the smart fortwo by 905 units. And the smart fortwo out-sold the Scion iQ by 122 units. Mini sales were split, of course, between multiple models. There were 1584 “original” Cooper hatchbacks sold, both Coopers and Cooper S hatchbacks, that is. Add to that 219 Clubmans, 126 Convertibles, and 146 of those dreadfully ugly Coupes. We are also aware that 1398 of the 10,962 Jettas sold in America in January 2012 were SportWagens. Jetta wagons are basically stretched Golfs wearing Jetta badges. Sales of the Jetta sedan were down just 1.8%.

Again, scroll past the jump for details on midsize and large cars. While visiting GoodCarBadCar.net, click any chart for a larger view. Access the dropdown menu at the top right of this page to find monthly and yearly sales figures for any model on sale in North America. 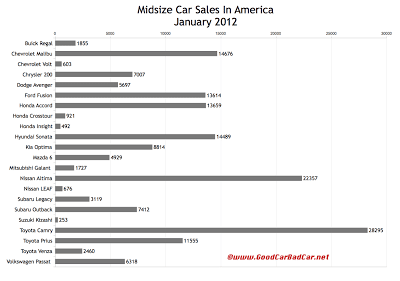 There are things the table below and the surrounding charts won’t tell you about midsize car sales in America. For example, January 2012 was the worst sales month for Buick’s Regal since October 2010. It was also the Chevrolet Volt’s worst sales month since August 2011. The Nissan LEAF easily out-sold the Volt, that’s for sure, but it isn’t anywhere near its max. Nissan sold 1708 electric cars in June of last year. Sales of the handsome Suzuki Kizashi haven’t been this low since February 2010. The year-over-year change calculated for the Chrysler 200 involves Chrysler Sebring sales from a year ago.

Volkswagen’s year-over-year percentage change for the Passat reflects the fact that Volkswagen didn’t really have Passats to sell in the winter of 2011. Passat sales jumped from 314 in August to 3176 in September, 5040 in October, 6018 in November, 6884 in December, and then 6318 in January (a much smaller overall market). During the same period, sales of the Passat CC fell from 2371 in August to 1610 in September, up to 2025 in October, down to 1698 in November, way up to 2450 in December, and way down to 1415 in the smaller January market. It appears unlikely that the regular Passat has any impact on sales of the less practical CC.

One note on platform-sharers: together, the Kia Optima and Hyundai Sonata, two cars which are totally unrelated in the style department, found 23,303 buyers in January. That’s enough to top the second-place Nissan Altima, but not nearly enough to challenge the all-conquering Toyota Camry for top spot. 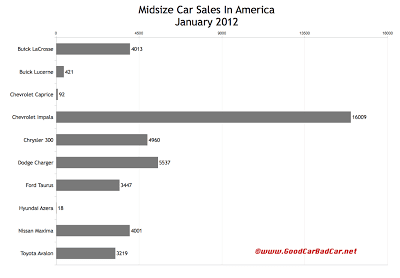 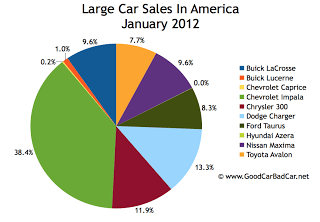