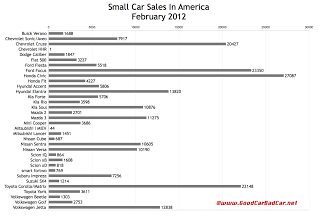 Sales of the Honda Civic sedan and coupe shot up 42% in February 2012. This rise was great enough to make the Civic tops among small cars in America sales volume. 48,970 Civics were sold in America during the first two months of 2012. Its lead over the Toyota Corolla (and Matrix) is now at nearly 9000 units.

The Honda Fit, with its smaller exterior dimensions but roomy cabin, was not tops among subcompacts. That honour goes to the Nissan Versa. The Fit, in fact, was fifth in the segment, behind the Chevrolet Sonic, Hyundai Accent, and Ford Fiesta. The Mazda 2 trailed all its rivals but did report a 211% year-over-year-bump.

Among niche small cars, the Scion iQ squeaked out a victory over the smart fortwo. The Mini Cooper beat the Fiat 500 by 459 units, but did so with a much wider range of offerings. 500 sales are split between the hardtop and cabriolet. Mini sales are split between the regular Cooper (the Hardtop as they call it), the Convertible, Clubman, Coupe, and Roadster. Mini sold 2427 Hardtop Coopers in February 2012, along with 532 Clubmans, 363 Convertibles, 254 Coupes, and 110 Roadsters. 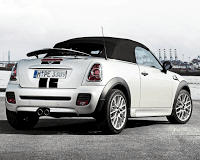 As for the most popular American small cars, that race was won by the Ford Focus in February. Sales jumped 115% to 23,350, 1923 units ahead of the Chevrolet Cruze. The Focus’s year-to-date lead over the Cruze is now at 2274 sales. On the smaller side, the Sonic beat the Ford Fiesta by more than 2000 sales in February; its two-month total is 4625 units better.

After the jump you’ll find plenty of hardcore sales data for small cars, midsize cars, and large cars, along with charts you can open for a quicker glance with nothing more than a click. Monthly and yearly sales data for all these models and every other nameplate currently on sale can be accessed through the dropdown menu at the top right of this page or on GoodCarBadCar’s Sales Stats home. 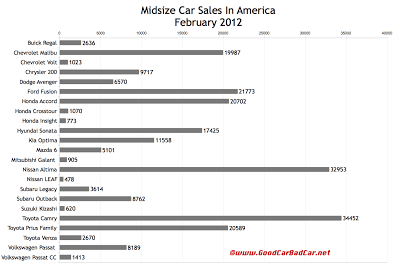 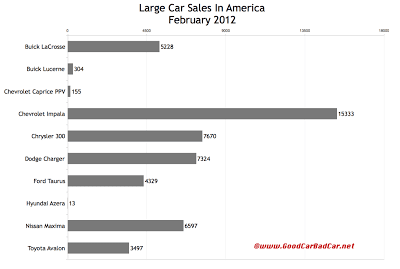 Source: Manufacturers & ANDC
Chrysler 200 sales are compared, year-over-year, with the 200 and Sebring. Only 17 of the Aveos and Sonics sold were Aveos.