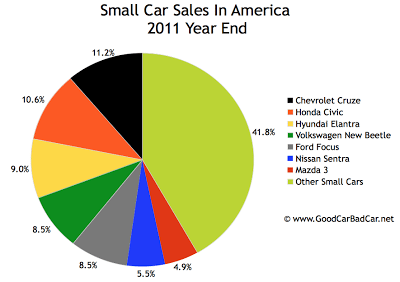 The vast majority of America’s best-selling cars can be found in the three tables below. Cars like the decreasingly popular Honda Civic and Toyota Corolla appear in the first list of small cars. Scroll further for a look at the once again popular Toyota Camry. Finally, you’ll find the Chevrolet Impala and Dodge Charger at the bottom of this post.

To begin then, let’s consider U.S. small car sales in 2011 – not that the December numbers are meaningless, but hey, a whole year is more interesting than a single month.

Mini’s struggles were chronicled earlier today. Such troubles are well-hidden by the Countryman’s presence. Besides, the Cooper is down mostly because of the Clubman and Convertible, only somewhat as a result of the regular Cooper’s decline… Chrysler sold 1328 PT Cruisers in 2011… The Ford Focus finds 2.6 buyers for every single buyer the Fiesta acquires… Chevrolet sold 24 Aveos and five Cobalts in December, 28,601 and 856 in 2011. The Cruze is, by all accounts, a hit. The Sonic might turn out to be… Honda has now introduced a Civic-based Acura. It’s called the ILX, and though probably not a tremendous car, it looks a lot better than the Civic. Midst the Civic’s struggles, Fit sales were up this year… The Hyundai Elantra is a very popular car. Hyundai sold 2.5 Accents every time Kia sold one of the better-looking Rios in December. Did anybody ever think Kia would sell over 100K Souls annually in America? The 2 hatchback made up 5.6% of all Mazda sales in the United States in 2011… The i MiEV, Chevrolet Volt, and Nissan LEAF made up 0.2% of the American new vehicle market in December… Combined, the Versa and Sentra were 54,000 sales shy of the Nissan Altima’s total… Despite the declines reported by Scion’s xB and xD and the late start to iQ sales, Scion’s 2011 volume was up 7.9%… 13,805 sales out of the Subaru Impreza’s total were of the WRX variety, WRX sales were up 65.9% in 2011… It didn’t used to be this way, but cars made up 73.1% of Suzuki’s total sales in 2011… Toyota Canada breaks down the Corolla and Matrix total – they do the same for the Prius and Prius V… Volkswagen sold 26,845 Jetta SportWagens (really Golf Wagons) in the United States in 2011. That’s 15.1% of the Jetta’s total. Volkswagen sold 16,867 GTIs (really… Golf GTIs) in the United States in 2011. That’s 48.6% of the Golf’s total.

For midsize and large car U.S. sales results from December 2011 and for 2011 year end, check out the tables and charts after the jump. 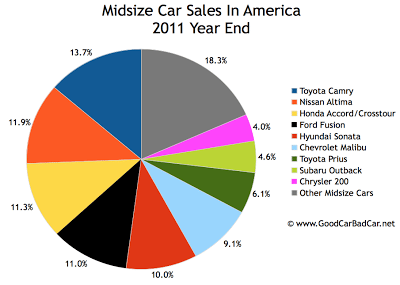 The Regal continues to be a bit player, and December’s improvement wasn’t good enough in a market that grew substantially; in a sector which posted some major increases. Malibu sales should climb more effectively when the new car comes out in 2012, but will the new car be desirable? At Chrysler, the 200 and Avenger have provided big boosts on little investment, but the company will need an all-new Dart-like leap forward before long… Just after Ford recorded a terrific Fusion increase, a new Fusion looks like even more of a winner… The new Accord, on the other hand, needs to stem the tide. Accord sedan sales were down 16.6% in 2011. But will the new Accord be different enough? Hyundai and Kia continue to gain market share – the Sonata/Optima platform earned more sales than the Camry in 2011… Why is the good-looking Mazda 6 not able to attract legions of U.S. midsize buyers? Sales were up in 2011, but only barely… Bid farewell to the Mitsubishi Galant, at least dealers were able to sell more of them in 2011 than in 2010, although at steep discounts… Give honour where honour’s due – the Altima was the second-best-selling car in America in 2011… The Outback is 2.5 times more popular than the Legacy sedan. And they say Americans don’t like wagons. Clearly turning wagons into pseudo-SUVs helps… Suzuki Kizashi sales were up this year, but it was still one of the worst-selling cars in the United States… Pay close attention to the Camry’s end-of-year performance. Not only is its lackluster year acceptable given the earthquake-related crisis, it was also the XV40 Camry’s final year… The new Passat is unlikely to become America’s best-selling car. But 6884 won’t be the peak for this car. 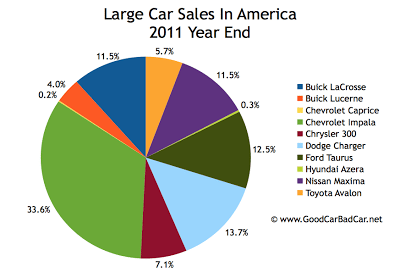 Bigger, mainstream cars struggled to take the fight to outright premium cars, regardless of the value and space which are inherently part of these big American or American-style cars.

The Lucerne is dead, so we shouldn’t be shocked that sales plunged. But Buick LaCrosse sales slid, as well… Surely a new Chevrolet Impala, if it’s still a value-priced alternative to midsize sedans, will boost sales in 2012… The Chrysler 300 and Dodge Charger ended 2011 on a roll, and they’ll likely start 2012 that way, but the year as a whole was not kind to Chrysler’s big cars. The Dodge Challenger was up 7.5, however… Ford’s Taurus total fell even harder than Dodge’s Charger total… Hyundai’s taking its jolly time replacing the Azera… The Nissan Maxima remains a hard sell when customers could opt for the more dynamic Infiniti G… And the Toyota Avalon has as much appeal among the core of the American market as a three-cylinder Peugeot, but it was the Avalon that became the only car in the segment to improve on last year’s total. It remains unpopular, nonetheless, even when compared against class rivals.