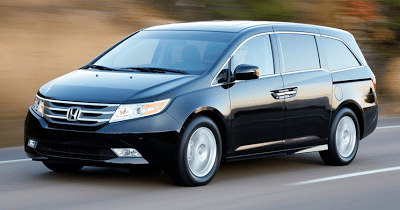 As you’ll see in the chart below the table, more than 5% of those 1.02 million sales were recorded by Ford’s F-Series, America’s best-selling vehicle. You can read more about the F-Series and America’s nine other best-selling trucks here.

The Honda Accord was the best-selling car in America in October, capturing 2.4% of the overall market. That’s if the Crosstour’s 1478 sales are included in the Accord’s tally, something we’ll be doing through the end of the year. Total Accord/Crosstour sales fell 1.1% in October. The Accord’s 19 closest competitors for October’s best-selling car crown can be seen here.

Only one minivan made its way onto October’s list of America’s 30 top selling vehicles. The Honda Odyssey enjoyed a 5% year-over-year increase in October. Odyssey sales are down 3% to 86,436 year-to-date. Sales of Chrysler’s Town & Country and Dodge’s Grand Caravan fell 25% and 14%, respectively, last month. Combined, Chrysler’s minivans found 13,438 buyers. Through ten months both the Town & Country and Grand Caravan are out-selling Odyssey, as is the Toyota Sienna.

Last month’s version of this table can be viewed here. What you’ll see below is October 2011’s list of the Top 30 Best-Selling Vehicles In America.

Source: Manufacturers
Red font indicates a decline in year-over-year sales.
Accord sales include the Crosstour. GCBC will continue this through December for comparative purposes.
Chrysler 200 year-to-date sales include 2380 Sebrings. The 200’s September 2010 refers to the Sebring.