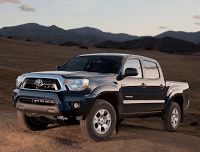 Huge year-over-year gains reported by GM’s pickup twins weren’t great enough to topple the Ford F-Series from its seemingly permanent position atop America’s best-selling pickup truck standings. The Chevrolet Silverado and GMC Sierra were up 34% and 22%, respectively, in November 2011. Together, they found 46,222 buyers last month, 1512 fewer than Ford’s F-Series.

Stuck between the Silverado and Sierra was the Dodge Ram, another truck which, with America’s insatiable truck appetite, found it easy to increase sales from November 2010 levels. Ram sales are up 24% this year and climbed 8% in November.

November appears to have been a month in which sales veered back toward the past. Sales of the new Toyota Camry grew by 13%. Chevrolet sold 8401 Tahoes, up 34% from last November. It wasn’t just the Tahoe – the Ford Explorer and Jeep Grand Cherokee were back near the top of America’s best-selling SUV list. And Americans bought way more trucks than they did at this time last year.

Check out last November’s best-selling truck list here, or just go back one month to October by clicking here. Below, you’ll find the top 10 best-selling SUVs in America from November 2011.