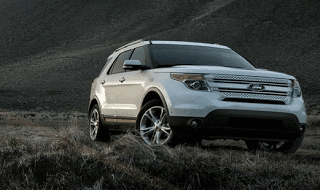 Honda used May 2012 to slightly expand the lead of America’s best-selling utility vehicle over the second-ranked Ford Escape. The Ford is now almost 25,000 sales behind the very popular Honda.

Six brands are represented in this list of America’s 10 favourite SUVs and crossovers. Honda, Chevrolet, and Nissan go it alone with the CR-V, Equinox, and Rogue. Ford landed the Escape in second, the Explorer fifth, and the Edge in seventh place. 876 of the Explorers sold were Police Interceptors. Two Toyotas – the RAV4 and Highlander – recorded huge gains over the tsunami-affected May of last year to finish fourth and tenth. Jeep’s Wrangler and Grand Cherokee finished May as the sixth and seventh-best-selling SUVs in the United States.

These were the 10 best-selling SUVs in America in May 2012. Historical monthly and yearly sales figures for these ten vehicles and every other nameplate currently on sale in North America can be accessed through the first dropdown menu at GoodCarBadCar’s Sales Stats home.