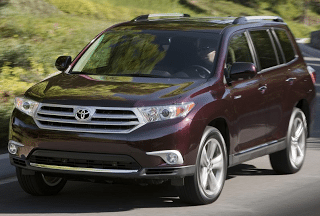 Only six brands managed to crack this list of the 10 best-selling SUVs in America in March 2012. All six of those brands were represented in the top six. Ford threw another two candidates into seventh and eighth spot, while Jeep and Toyota added the Wrangler and Highlander to what they’d already accomplished with the Grand Cherokee and RAV4.

The still-departing Ford Escape was the only utility vehicle on the list to report declining year-over-year volume. Escape sales fell 5% but were up 5% in the first quarter. The Honda CR-V ended up as the best-selling SUV in America both in March and in the first quarter as a whole. Sales were strong enough to make the CR-V the top Honda, as well. Not at any other point in the last two years (or more?) has an SUV or crossover of any kind been able to find more than 30,000 buyers in a single month.

Imagine, for a moment, continually fast-rising Jeep sales. Were the Grand Cherokee and Wrangler to post 43.3% and 42.6% gains next March they would combine for 38,000 sales. If the Jeep brand can pull off another 36.1% jump one year from now, the SUV-only brand would sell more than 61,000 sales. It may be hard to imagine, but when Jeep was the ninth-best-selling automaker in America in March 2011, did you figure a 36% year-over-year increase was in store for March 2012, that Jeep would be 8500 units clear of its next closest competitor despite fuel prices which are consistently high?

America’s 10 best-selling SUVs from March 2012 are in the table below. Monthly and yearly sales figures for these models and every other nameplate currently offered for sale in North America can be found through the dropdown menu at the top right of this page or at GoodCarBadCar’s Sales Stats home.