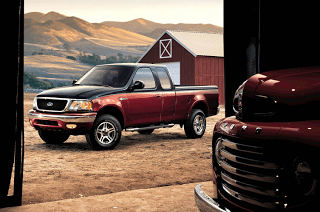 Top 40 Best-Selling Vehicles In America In 2002

In 2002, America’s 34th-most-popular vehicle was the Chrysler PT Cruiser. Ranked 39th was the Dodge Neon. The Buick LeSabre made an appearance in the 35th spot. And Pontiacs sat in positions 28 and 37.

Of course, the Century and LeSabre are gone. The TrailBlazer has departed. There is no longer a Chrysler PT Cruiser for sale, nor is there a Dodge Neon. Pontiac is dead. What hasn’t changed? The Ford F-Series, America’s best-selling vehicle today, was, as you know, America’s best-selling vehicle in 2002. Together, GM’s pickup twins – the Chevrolet Silverado and GMC Sierra – beat the F-Series by nearly 41,000 sales.

The best-selling car in America in 2002 was the Toyota Camry. In second was the Honda Accord, more than 35,000 sales back. The third-ranked Ford Taurus was 66,290 sales behind the Accord.

Finally, the best-selling SUV in the United States in 2002 was the Ford Explorer. No SUV came within 184,000 sales of catching the all-conquering Ford. America’s seven best-selling SUVs in 2002 were American, from the Explorer through to the TrailBlazer, Jeep Grand Cherokee, Chevrolet Tahoe, Jeep Liberty, Ford Expedition, and Chevrolet Suburban.

The Good Car Girl wisely noted that, at this time of American SUV domination, American SUVs were true sport-utility vehicles. Admittedly, the same bunch of seven SUVs are, for the most part, still more overtly truckish than most offerings from most other automakers. Moreover, though not as popular now as they were in 2002, the Explorer and Grand Cherokee are successful once again. Meanwhile, the TrailBlazer’s softer relative, Chevrolet’s Equinox, is routinely positioned near the top of America’s monthly best-selling SUV lists.

In the table below you’ll find the top 40 best-selling vehicles in America from 2002. GoodCarBadCar will be gradually rolling out more historical best seller lists over the next number of weeks – click here for 2003’s Top 40. But of course, the current stuff is still available for those who care to forget the past. And the past should, in some instances, be forgotten. The Chevrolet Cavalier? Twelfth? Ick.