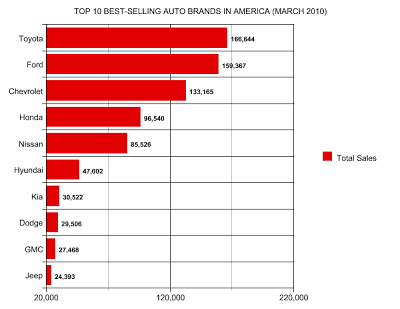 After extensive conversation around whether Toyota would even survive the bad press regarding its huge Recall problems, the Japanese giant roared back to life in March with the help of big discounts. Scanning the Top 10 Best-Selling Auto Brands in America from last month will lead you to believe that no harm has been done to Toyota’s reputation; at least no harm that a few incentives couldn’t fix.

In a few minutes you’ll see another Graph which points to the Toyota Camry as the best-selling car in America for the month of March. In fact, the runner-up was the Toyota Corolla. But that’s supposed to be a secret until The Good Car Guy publishes the next article.