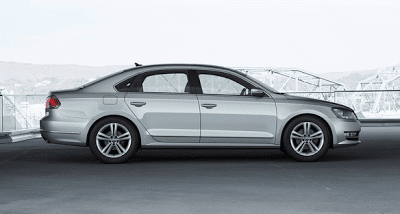 General Motors sales were up, but only by 1.7%, and only because of Chevrolet. GMC, Cadillac, and Buick all reported declining October sales. At Ford, America’s best-selling automaker, sales rose 13% as the F-Series posted a 7% increase, Ranger sales jumped, and the Escape/Explorer/Expedition trio made collective gains of nearly 14,000 units.

No automaker competing in America reported a greater year-over-year percentage improvement than Volkswagen. The brand’s 40% boost is very much attributable to two somewhat dull sedans. Jetta sedan sales climbed 14%; Passat sales were up by 4576 units (986%) to 5040. No automaker suffered a decline greater than Saab’s 54.5% drop, though that fact is about as surprising as news that Kim Kardashian is getting another divorce.

Two major Japanese auto manufacturers continued to struggle, and though there are huge concerns with Thailand’s flooding, it seems like the future is starting to look a little brighter for Honda and Toyota. Honda’s daily sales rate was actually better this October than last. Sales at Honda’s luxury division, Acura, rose 1% in October.

America’s auto market grew by 8% in October, compared with October 2010. That means, through ten months, the market is up 10% over the 9.55 million new vehicle sales between January and October of 2010. For a look back, check out September’s edition of this post, click here, or for last October’s version, click here. Check out the completely updated Canadian Auto Sales By Brand post here. And while waiting for a complete rundown of best seller lists and segment-by-segment breakdowns, scroll through September’s U.S. auto sales recap here.

America’s Auto Sales By Brand table for October 2011 is below.