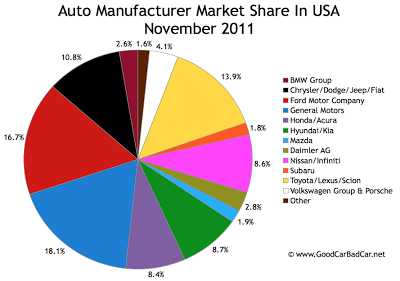 Home
Top Level Reports
Brand Marketshare
America’s car market grew by 13.9% in November 2011. This means Americans acquired 121,419 more new vehicles in November of this year than November 2010. As was already mentioned, four domestic brands accounted for 48,776 of those extra sales.

Growth? Most notably, from October 2011 to November, Toyota managed to gain almost a point. Nissan moved up half a percentage point.

America’s auto manufacturer market share chart for November is below. Detailed sales figures for every brand can be seen here.