The SMMT says July 2012 was the fifth consecutive month of improved year-over-year sales results in the United Kingdom. The industry posted a positive adjustment of 9.3%, pulling the seven-month total up 3.5% compared with the January-July period of 2011.

Specific results for each and every brand can be seen in the table below. The accompanying chart, which you can click for a larger view, displays July market share figures for the biggest manufacturers. 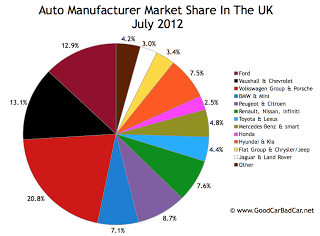 Back at the beginning of the month GoodCarBadCar.net published posts just like this one for the United States and Canada. Ford led the way in each of these three countries. Other similarities between the UK and North American markets are nearly nonexistent.