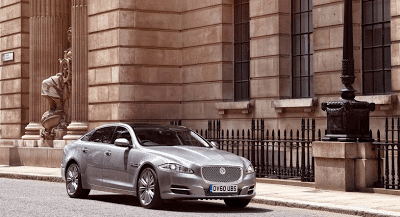 In January 2012, Ford was once again the United Kingdom’s leading automaker as Blue Oval sales rose 2% to 20,061, or 15.6% of all new vehicles sold in the UK. Volkswagen and its numerous brands led the way in terms of market share, reaching 20.8%, up from 19.3% in December. General Motors, by way of its core brand Vauxhall and its increasingly popular Chevrolet brand, sold 14,174 vehicles. That equates to 11% of the market, down from 13.8% in December. Ford market share, by the way, rose from 12.3% in December 2011.

Establishing which brands are premium and which are mainstream is more challenging than ever, but the challenge is even greater when examining UK sales. Still, based on accepted practices, Audi was the best-selling luxury vehicle manufacturer in overall volume as sales reached 8563 in January 2012, good enough for fourth overall. BMW, 2011’s year end leader, fell 28% from January 2011 levels to 6249. 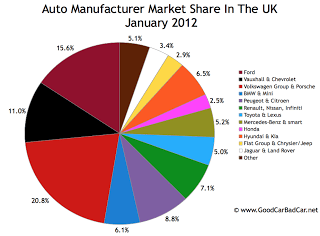 Kia beat its parent company Hyundai by 216 sales. Land Rover out-sold Honda. Renault is quickly becoming a much smaller company in the United Kingdom as its range was recently cut in half. January sales fell 28% to 2802. UK sales at Renault’s Japanese partner, Nissan, were 2.2 times stronger.

For all you once read about fancy WRX Subarus in UK car mags, the brand is now terribly weak on the other side of the Atlantic – Porsche sold nearly twice as many cars in January. Czech Republic-based Skoda was Volkswagen’s leading value brand, beating Spain’s Seat brand by 1288 sales.

As more evidence that Brits enjoy locally-produced efforts, consider that Jaguar sold 915 cars in the United Kingdom in January 2012. That’s only 70 units down from what Jaguar achieved in the United States in January despite the fact that the U.S. market was 7.1 times the size. In other words, if Americans bought as many Jaguars as Brits did, Jaguar’s U.S. sales total in January would have been closer to 6500 than 1000.

For a look at the 10 best-selling cars in the United Kingdom in January 2012, click here. Links to previous versions of this post can be viewed below the table which lists January volume beside a column which compares January’s volume with the same from a year prior. The market share chart above can be expanded with a click.