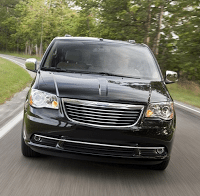 Speaking of the Chrysler Town & Country and Dodge Grand Caravan as a single unit makes ever more sense, particularly now that Fiat bosses have decided that dealerships don’t need to be selling two barely differentiated vans. It makes sense that with decent trim line availability, Chrysler could have sold 20,608 Town & Countrys in September had the Grand Caravan not been available.

But then why hasn’t General Motors decided to sell just a single full-size truck line instead of offering customers a Sierra and a Silverado? Granted, GM has worked hard to build three very different crossovers so Buick, Chevrolet, and GMC can offer customers a unique Enclave, Traverse, and Acadia.

Strangely enough, none of the minivans which go it alone were as popular as either of the Chrysler twins in September. Sales of the Honda Odyssey jumped 15% in September. Kia Sedona sales rose 40%. Sales of the Mazda 5 climbed 54%. The Nissan Quest, thanks to last year’s hiatus, posted a 21,200% improvement from four sales to a class-low of 852. Only two minivans suffered year-over-year declines, the Volkswagen Routan, down 4%, and the Toyota Sienna, down 10%. 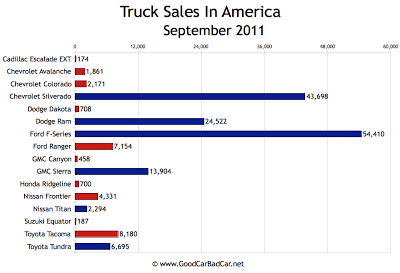 There’s more data available for September’s ten most popular pickup trucks here, but the chart above shows the complete truck market, all 16 nameplates.

September 2011 was a good season for trucks in America. segment-leading Ford F-Series was up 15%. Ford saw sales of the F-Series’ dying smaller stablemate, the Ranger, rise 88%. Chevrolet Silverado sales jumped 36%; the GMC Sierra was up 26%. Sales of the Dodge Ram pickup soared upwards at a 45% clip.

Though the overall new vehicle market improved by 10% compared with September 2010, though America’s best-selling pickups fared much better this September than last, not all was well in the truck segment. Honda Ridgeline sales plunged 49%. The Ridgeline’s down 49% year-to-date, as well.

GM has announced that the all-new Thailand-developed Chevrolet Colorado will come to North America, and sales of the current Colorado are up 30%, but Colorado sales slid 20% in September. Sales of the GMC Canyon, the Colorado’s twin, fell 41%.