Truck Sales And Minivan Sales In Canada – May 2011

9296 minivans were sold in Canada in May 2011. Not shown in the pie chart below are seven Hyundai Entourages, surely wildly discounted vans as the Entourage was cancelled before the 2010 model year. Through the first five months of 2011 Hyundai has sold 30 minivans. Last year at this time Hyundai had sold 56 Entourages. Hyundai Canada’s best year with the Entourage was 2007 when 2383 were sold in the calendar year.

The Entourage, not permitted to even form a hint of a slice in GoodCarBadCar.net’s chart, is far from the Dodge Grand Caravan, the minivan which held 60% of the Canadian minivan market in May.

There are a bunch of other vans which sell fairly well. Mercedes-Benz Canada sold 234 Sprinters in May. Add to that 1148 E-Series Fords, 361 Ford Transit Connects, 37 Nissan NVs, 730 GMC Savanas, and 543 copies of the Chevrolet Express and the commercial van story is told. 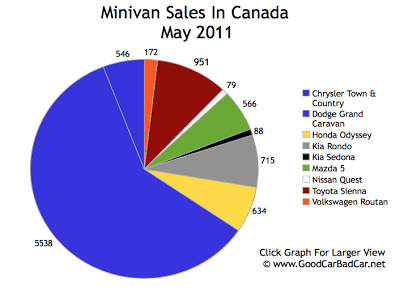 The Dodge Grand Caravan seems popular, and it is, but as a segment, minivans are nothing in comparison to pickup trucks, more than 24,000 of which were sold in Canada last month. Another Dodge was rather successful here. That’d be the Ram, not the Dakota. GM’s truck twins, the Sierra and Silverado, out-sold the Ram, but Sierra and Silverado sales were down 13% and 21% respectively. Dodge Ram sales, on the other hand, jumped 25% and are up 16% year-to-date.

If – and it’s a gigantic if – Ram sales jumped 25% in May 2012 and Ford F-Series sales repeated the 10% drop from May 2011, the Dodge Ram would be Canada’s best-selling truck. Despite Dodge’s momentum, that seems unlikely. 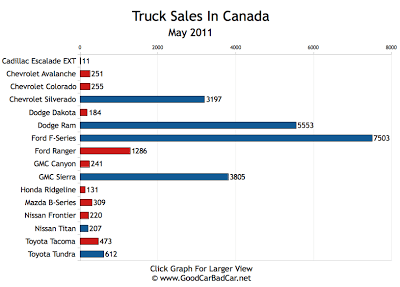