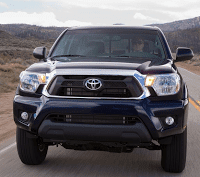 84% of the pickup trucks sold in the United States in August were full-size behemoths capable of driving over the hood of your midsize sedan.

That may be an exaggeration. The “hood of your sedan” part; not the 84% figure.

For more more details on truck sales check out the list of America’s Top 10 Best-Selling Trucks for August 2011.