If we ignore the fact that the Chrysler Town & Country and its Dodge sibling are the same van being sold by the same company, often in the same store, the Dodge Grand Caravan is still the best-selling minivan in America in the first half of 2011. With 56,970 sales from January to June, the Grand Caravan leads the Toyota Sienna by 2025, the Odyssey by 4002, and the Town & Country by 10,762 units. Dodge and Chrysler have combined to sell 103,178 minivans in the United States this year.

June 2011 sales of the Grand Caravan were up 14%; the Town & Country fell 24%. Honda Odyssey sales improved slightly. The Sienna was a rare strong performer for Toyota last month as sales jumped 28%. 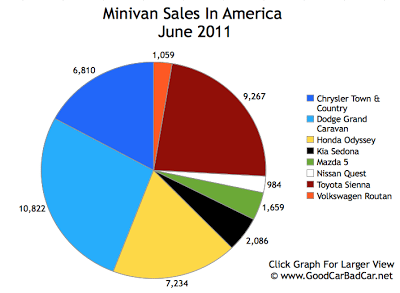 Sales of big ol’ American trucks were much improved in June. Dodge enjoyed a 35% Ram improvement in addition to a 21% jump in Dakota sales. Ford F-Series sales accelerated at a 7% clip to just under 50,000. Selling off some of the last Rangers with deep discounts helped sales of Ford’s small truck climb 18%. 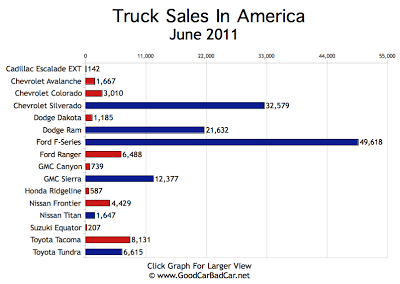