There were 128,782 full-size pickup trucks sold in the United States in March 2011, excluding the Chevrolet Avalanche and Cadillac Escalade EXT. That’s up from 113,395 in March 2010, a 13.6% increase in an overall market which grew 16.9%. Compared with February 2011, the full-size pickup truck market increased from 108,096, a 19.2% jump in an overall market which grew 25.5%. All this occurred even as Americans find themselves paying about a dollar more for gas than they were at this time last year; about 20 cents more than they were paying a month ago.

There are clearly conflicting facts at play here. First, sales of big pickup trucks are up, so Americans must be ignoring rising gas prices, right? Well, full-size truck sales are up, but not as much as the overall market. In other words, the growth in the large pickup truck segment isn’t as pronounced as in the rest of the new vehicle market. Then again, sales of the Detroit trucks which made up 92.6% of the full-size truck market in March – the Chevrolet Silverado, Dodge Ram, Ford F-Series, and GMC Sierra – were up 19.2% over March 2010, out-pacing the overall new vehicle market’s pace. Set aside the Nissan Titan’s 22% decline and the Toyota Tundra’s 30% plunge and the truck market appears especially strong. Sales of the four previously mentioned American trucks were up 17.9% from February.

Finally, a third point: demand for these pickups appears high, but incentives are raging and there are thousands of dollars on the hood of each and every truck. Sales couldn’t grow in such a manner were it not for 0% financing or $5500 off the MSRP. On a separate note, Chris Baccus says the take rate for Ford’s EcoBoost V6 is presently at 30%.

As for the minivan family, there were 48,311 sold in March. The Honda Odyssey was most popular. The Toyota Sienna wasn’t far behind a’tall. However, join the two Chrysler products together – the Town & Country and slightly better-selling Grand Caravan – and you see Fiat Auburn Hills walking away with 39.4% market share. And don’t forget about some middling profits the Chrysler Group earns from building Volkswagan a handful of Routans in Windsor, Ontario. 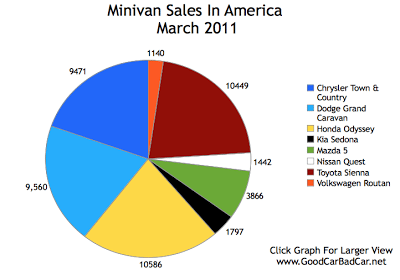 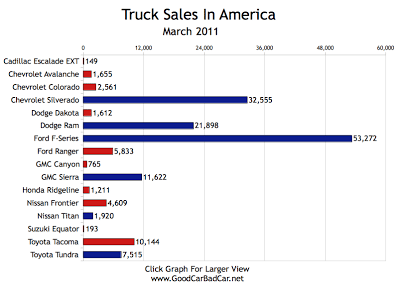