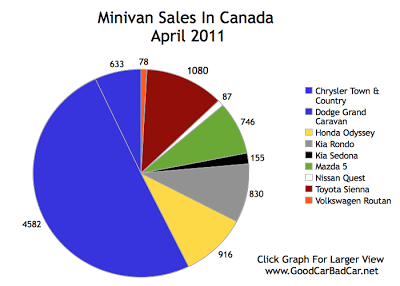 5.7% of all Canadian new vehicle sales last month were minivans. That’s a significantly higher percentage than minivans muster in the United States. Yet it mostly comes down to the one previously discussed model. Though the Toyota Sienna and Honda Odyssey’s overall share of the new vehicle market is slightly lower in Canada, the Dodge Grand Caravan’s market share grows from 0.76% in the United States to 2.9% in Canada. That about explains it.

If you’re coming to the conclusion that Canadians choose minivans instead of SUVs and crossovers for fuel efficiency reasons, well, you’d be wrong there. SUVs and crossovers make up an equal part of the market north and south of the border. Indeed, pickup truck sales are higher in Canada than in the U.S – its car sales that are lower. The Ford F-150, believed by Americans to be an epically omnipresent nameplate, is even more forceful in Canada. The F-Series range accounts for nearly six out of every hundred Canadian new vehicle sales but less than four per hundred in the U.S. F-Series sales were up 5% in April in Canada.
Overall, Canadians acquired 26,255 new trucks from April 1st to the 30th. Only 2489 of those sales – fewer than 10% – were from import brands. The six full-size rivals from Chevrolet, Dodge, Ford, GMC, Nissan, and Toyota were allotted 85% of all truck sales. 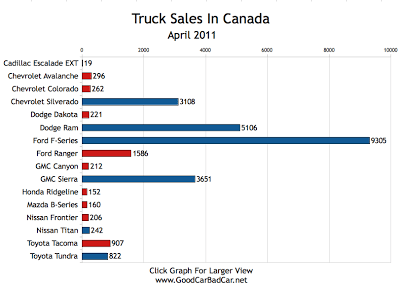