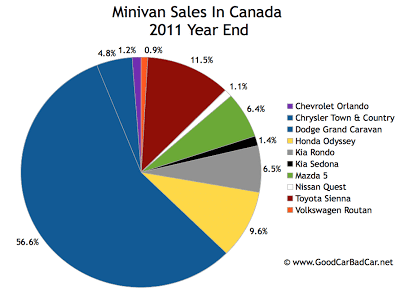 Last known as a model year 2009 vehicle, the Hyundai Entourage was still somehow sourced for purchasing in Canada in 2011. 49 were sold. On the pickup side of the ledger, where there are now only 15 nameplates, Mazda sold 661 B-Series pickups in Canada in 2011. That was enough to make the B-Series more popular than the Cadillac Escalade EXT.

As usual, the Dodge Grand Caravan was Canada’s best-selling minivan in 2011. 56.6% of all minivan sold in Canada were Grand Caravans. In total, 61.4% of all minivans sold in Canada in 2011 were Chrysler products, or 62.3% if you include the Routan as a member of the Windsor-built Chrysler family. The Toyota Sienna’s 1775-unit victory over the Honda Odyssey came as a result of the Sienna’s 8.8% year-over-year increase. Odyssey sales were also up, but only by 5.2%. Canada’s overall new vehicle market increased by less than 2%.

In the mini-minivan segment, a category which now includes the awkward-looking Chevrolet Orlando, the Kia Rondo finished 2011 70 sales ahead of the Mazda 5. 13,366 mini-minivans were sold in Canada in 2011, meaning one was sold for every four Grand Caravans. Dodge is currently advertising the Grand Caravan’s base price as $19,995, identical to the price point of the basic Rondo and Orlando. Mazda’s Canadian website has the 5 at $21,895.

Take a look after the jump at detailed December and 2011 sales info on pickup trucks in Canada. The Ford F-Series, as you might have guessed, was easily the best-selling truck line. And while Dodge’s Ram was quite clearly the number two truck, GM’s twins were 22,906 sales ahead. You can also see more on the pickup truck market from this Top 10 Best-Selling Trucks post for December and this one for 2011. Of course, monthly and yearly sales figures for all these models and every other nameplate currently on sale can be accessed through the dropdown menu at the top right of this page. 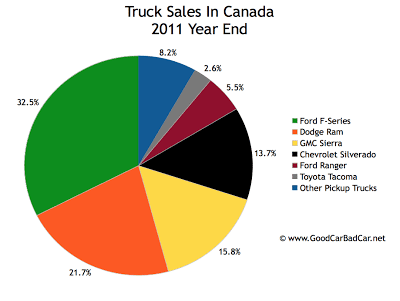 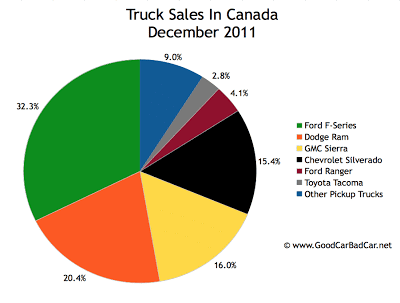