The Kia Rondo’s struggles in the United States that Kia’s given up on their miniature minivan in the American market. But minivan market share in Canada leans favourably in the Kia Rondo’s direction. Through eight months of 2010, the Kia Rondo is only 321 unites behind the Mazda 5, but the trend line is sliding toward Kia. The Rondo beat the 5 in July after coming close in June and being slaughtered in May. It’ll be a fight to the finish.

Further up the minivan scale, the Dodge Grand Caravan (and slow-selling Chrysler Town & Country) nearly out-sell all other minivans combined. If the Chrysler/Dodge duo’s sales hadn’t slid 23.1%, the two would have carved out a slice greater than half the pie. Both the Honda Odyssey and Toyota Sienna posted huge improvements over August 2009’s totals.
In the more exciting but less conspicuous muscle car segment, the Ford Mustang laid a beatdown on the Chevrolet Camaro and Dodge Challenger in Canada in August 2010. Now that the 2011 Ford Mustang is fully on-stream at Ford Canada’s dealerships, the Camaro has a much tougher fight on its hands. Chevrolet sold 44 fewer Camaros in Canada last month than in the same period of 2009; Ford Mustang sales jumped 17.2%. The Chevrolet Corvette and Dodge’s Viper and Challenger all posted gains in August, as well. 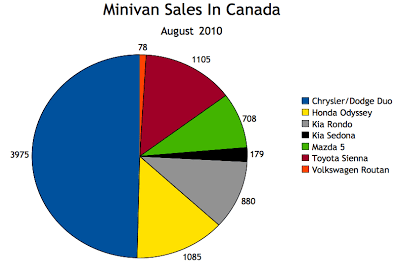 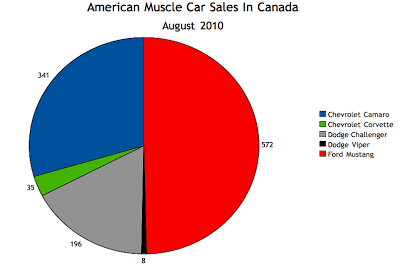