Some people wouldn’t think to say Toyota sold more midsize cars than anybody else in Canada in September 2010. Here’s why: sales of the Toyota Camry fell to 683 from 1309 last September. Nissan Canada sold 1685 Altimas in September 2010, so how did Toyota beat Nissan, or the Ford Fusion’s 1525 sales or the 2011 Hyundai Sonata’s 1196? Or, for that matter, the Honda Accord’s 1025 sales or the Chevrolet Malibu’s 998?

The Toyota Venza, approximately ten times less popular than the Camry in the United States, is a star for Toyota Canada. Venza sales were almost double the Camry’s total in Canada in September and, year-to-date, the Venza trails the Camry by only 821 units, a figure which seems surmountable by New Year’s Eve 2010. Take the 2010 Toyota Venza away from Toyota in September and the brand’s total sales volume drops to 11,965, behind Dodge and Honda for fourth in Canada. With the Venza, Toyota was #2.

Then, of course, you have the Toyota Avalon. A rare sight even in the U.S. car market, a market more accepting of big cars, the Avalon is scarcely seen in Canada. In 2010, only 402 have been sold in all of Canada through September 30th. The Avalon trailed all direct competitors in September 2010 by gigantic margins.

Worth noting: Chrysler 300 sales dropped 54.8% in September 2010. Sales of the Dodge Charger fell 58.6%. Chrysler Sebring volume plummeted an astonishing 84.7%. Astonishing? What does that make the Dodge Avenger drop? 91% must be downright frightening. The arrival of the 2011 Chrysler 200 should improve things, but only temporarily. Chrysler and Dodge need an all-new midsize product. 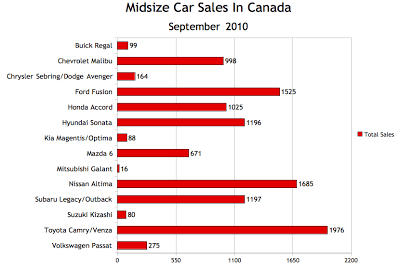 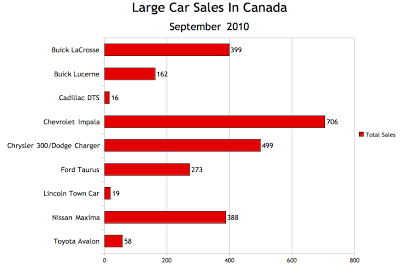