For the first time since May 2010, GM’s two big pickups, the GMC Sierra and Chevrolet Silverado, have combined to top the Ford F-Series in Canadian monthly truck sales. Together, GM’s Silverado and Sierra posted a 60.3% sales improvement over November 2009. The GMC Sierra accounted for 3570 of those 7116 sales. Ford F-Series sales were up 13.9%. Year-to-date, the Ford F-Series has a 90,778-79,379 lead over the GM twins. Proper supply of the 2011 Ford F-150, including the twin-turbocharged EcoBoost V6 F-150, should find more F-Series sales growth in January.

Dodge Ram sales jumped 138.9% in November 2010. News of the Ford Ranger’s production end didn’t hinder sales – the Ranger was up 7.7% from November 2009. Thanking the Toyota Tacoma and Toyota Tundra for their stumbles (down 30.9% and 24.7% respectively) GM’s smaller pickup twins, the Chevrolet Colorado and GMC Canyon, were up 134.6% compared with the same period a year ago. Reversing the trend of their larger brethren, it was the Chevrolet with higher sales last month, 310 to be exact. The Colorado and Canyon last combined to be on Canada’s best-selling trucks Graph back in August.

Oh, and the impression that Canadians aren’t as strong for trucks is clearly formed because SUVs don’t fare quite so well north of the 49th. Compare the size of the overall new vehicle market (7.52x bigger in the States in November) and then consider that, if General Motors sold pickup trucks in America like it did in Canada last month, the GMC Sierra and Chevrolet Silverado would have combined for more than 53,500 sales instead of the 35,400 General Motors put up. Regardless, this is a Canada Auto Sales post, and these are Canada’s five best-selling trucks from November 2010. 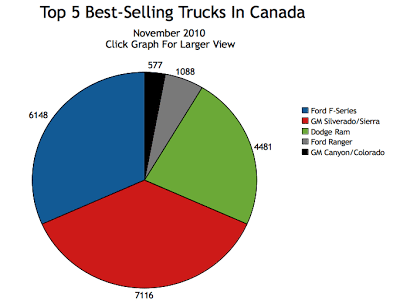