Indeed, together, GM’s Silverado and Sierra combined to be Canada’s most popular pickup in January 2011. When separated, the Dodge Ram took over the number two spot and Ford’s F-Series laid claim to the crown. F-Series sales were up 26% over January 2010 totals. The Ram posted a 24% jump. Silverado sales were up 6%; Sierra sales climbed 9%. The Toyota Tacoma, ranked sixth in the Graph if you consider the Sierra and Silverado as opponents but fifth if they’re a united force, was down 23%. The $13,999 2011 Ford Ranger slipped 22% as its long life comes to an end.

In four of the last seven years, the GM pickup twins formed a unit that out-sold every other vehicle in the country. In 2008, the Honda Civic was Canada’s best-seller. And in the last two years, the Ford F-Series handily beat all rivals. Based on January’s best-selling car figures, and based only on that, the Civic looks like it’s out of the race. It’s probably too early to form such a conclusion, but from January 31st, Detroit’s pickups are out too an astoundingly impressive early lead. 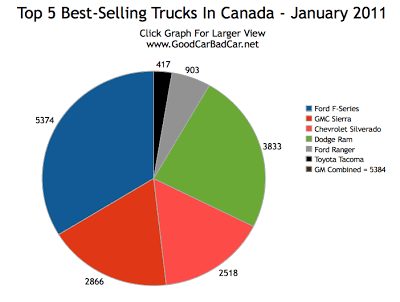