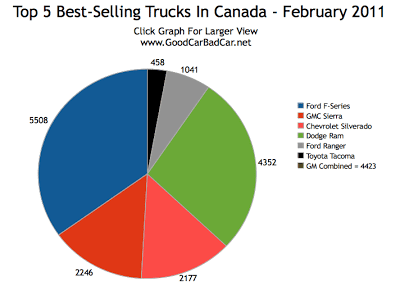 Home
Auto Brands
Chevrolet
Maintaining its gigantic slice of the pie, the Ford F-Series was once again Canada’s best-selling truck in February 2011. Not far from its tailgate was the Dodge Ram. With 4352 sales, the Ram was Canada’s third best-selling vehicle overall (if the GMC Sierra and Chevrolet Silverado are tallied separately) behind only the F-Series and Dodge’s own Grand Caravan. Ram sales were up 41.5%. F-Series sales fell 19.3% from 6829 in February 2010.

Together, the Sierra and Silverado are a force to be reckoned with. Yet sales of both trucks dropped slightly in February: the GMC was down 6.6%; the Chevy was down 2.5%. Even without the Elantra Touring’s 749 sales, the Hyundai Elantra sedan out-sold both GM full-size pickup trucks.

Nearing the end of its life, Ford Ranger sales fell from 1757, February 2010’s total, to barely more than a thousand last month. The Toyota Tacoma’s 38.5% decline resulted in fewer than 500 February sales, but there were still more Tacoma buyers in Canada than Honda found for its Accord sedan, or Toyota for the Camry, or Chevrolet for the Malibu.

Here are Canada’s 5 Best-Selling Trucks, all 6 of them. 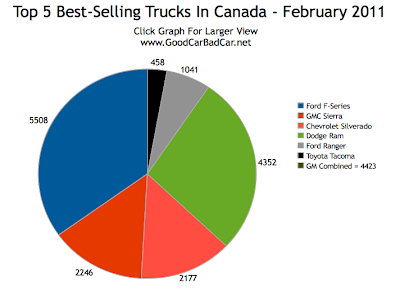