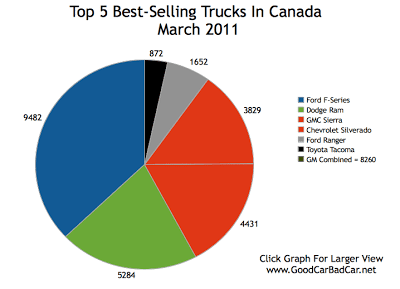 Home
All Vehicle Rankings
Trucks & Vans
Truck Sales
General Motors didn’t find enough pickup truck buyers in Canada in March to out-sell the Ford F-Series, but the GMC Sierra and Chevrolet Silverado did fend off the Dodge Ram with ease. Year-over-year, Dodge Ram sales increased 7.6% while sales of the Ford F-Series jumped 25.2%. F-Series sales stand at 20,364 at the end of 2011’s first quarter.

Back at General Motors Canada, Silverado sales climbed 28% and Sierra sales rose 26.4%. Way down the ladder in fourth and fifth positions (or fifth and sixth if you count the Silverado and Sierra separately), the Ford Ranger plunged 27.5% as it nears extinction and the Toyota Tacoma dropped 19.1%. 91% of all Tacoma sales in March 2011 were 4×4 models, on par with the 4×4 take rate in the first quarter.

“Light truck” sales, a group that includes vehicles as distinctly un-truckish as the Mini Countryman and Chrysler Town & Country, increased 12.1% compared with March 2010. In the same time frame, passenger car sales decreased by 1%. Light trucks made up 53.7% of the overall Canadian new vehicle market in March 2011, up from 50.6% in March 2010. 166 out of every 1000 new vehicles sold in Canada last month were either Ford F-Series trucks, Dodge Rams, Chevrolet Silverados, GMC Sierras, Ford Rangers, or Toyota Tacomas.