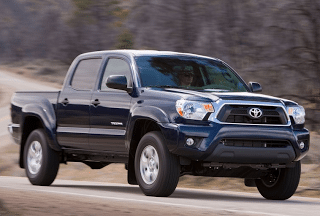 Here’s the good news for the Toyota Tacoma: it’s more popular in Canada than any other non-full-size truck that’s going to be on the market next year. Moreover, January 2012 sales were 23% better than January 2011 sales.

The bad news? A still-dying Ford Ranger was a more frequent acquisition in Canada last month than the Toyota Tacoma, and by quite a measure. Tacoma sales needed to be jacked up to the tune of about 57%, not 23%, if it was to become Canada’s fifth-best-selling truck in January.

And that’s the other thing. See, being Canada’s fifth-best-selling truck basically means you’re grabbing a large percentage of the small truck market, but really nothing in the grand scheme of truckish things. For every Ford Ranger sold in January, ten Ford F-Series pickups were sold. And for every Toyota Tacoma sold in January, nearly 13 F-Series pickups were sold. In fact, the fourth place Chevrolet Silverado crushed the Ranger and Tacoma by 1429 and 1567 units, respectively. Also, it was a particularly bad month for the Silverado.

Just how bad a month was it? January 2012 marked an interesting lack of success for General Motors. With just 4417 sales between the Silverado and GMC Sierra, the combined GM total didn’t just measure up to the single Ford F-Series, it also failed to match the Dodge Ram’s total, trailing by 34 units.

At the top of the heap, the Ford F-Series was the best-selling truck in Canada, as always. Compared with January 2011, F-Series sales are way up. A 22.4% gain in an overall market that’s up about 15% is quite something, especially considering fuel prices which make truck ownership sound as painful as wine-buying after consecutive years of southern European drought.