Ford’s F-Series pickup line remained atop the truck leaderboard in April on 5% gains that took the F-150 and its heavy-duty brethren up to 9305 sales. Way, way back in second place was the Dodge Ram, down 2.8% in April. Or, if you prefer, the combined efforts of General Motors’ GMC Sierra (-20.5%) and Chevrolet Silverado (-20%) slot GM in behind the Blue Oval boss. The F-Series was responsible for finding 36 out of every 100 Ford Motor Company Of Canada buyers in April 2011.

With 8260 sales between them in March, GM’s trucks looked poised for a takeover in April. Perhaps supply dwindled. Perhaps Ford’s message about its F-150 EcoBoost V6’s fuel efficiency got through the noise high fuel prices were making. Whatever it was, GM’s large pickup trucks fell 18.1% from March in a market which grew 4.2%.

Back at Ford, the soon-to-be-defunct Ranger was down 23.4% and the fifth or sixth-placed (depending on how you view GM’s twins) Toyota Tacoma was up 8.4%. Selling 822 times, the Toyota Tundra was up 26.5%. For every Tundra sold, Ford sold more than eleven F-Series trucks. Canada’s best-selling trucks are visible in the pie chart below. 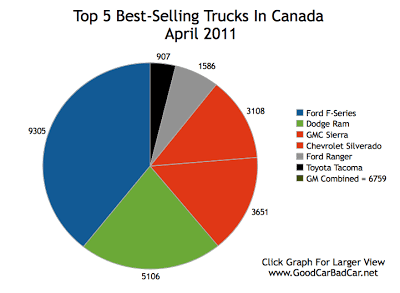