At the end of the year 2009, it was apparent that General Motors’ two full-size pickup trucks had out-sold the venerable Ford F-Series. It was relatively close, just 15,000 units or so, but GM was the overall champion, even if the company required different grilles to do the trick.

This year, the story has changed. Pickuptrucks.com says not since 2001 have the Chevrolet Silverado, Chevrolet Avalanche, and GMC Sierra failed to combine to out-sell the F-Series. Lo and behold, 2010 shall thus go down as the year in which Ford regained supremacy. With a 28,420-unit victory over the Silverado and Sierra (the Avalanche would add 20,515 to the cause), the Ford F-Series is easily identified as America’s best-selling vehicle of any kind and certainly the nation’s best-selling truck. F-Series sales were up 27.7% in 2010. That bodes well for the coming year considering the introduction of a line of new engines for the 2011 Ford F-150. 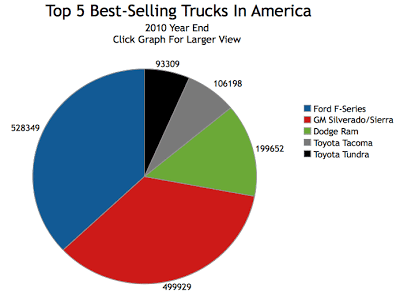