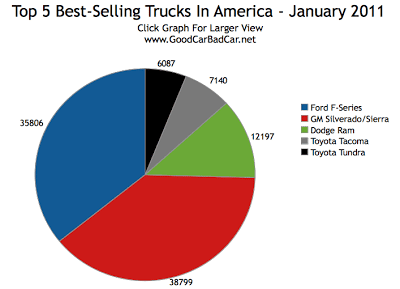 Home
All Vehicle Rankings
Trucks & Vans
Truck Sales
The most successful pickup trucks on sale in America all fared much better in January 2011 than in the same period of 2010. GM full-size truck sales were up 29.1% as Silverado sales rose 23.7%, and the Sierra jumped 46.2%. GM is out of the gate with a lead over Ford’s F-Series, but only when the Silverado and Sierra are combined.

Ford F-Series sales improved too, up 29.6%. Dodge Ram sales were up 22.5% in January. At Toyota, the Tundra improved significantly (55.9%) but is still selling at fairly inconsequential rates compared with General Motors and Ford. Sales of the smaller Tacoma improved by 5.8%.

Light truck sales, a figure which includes many vehicle types besides actual pickup trucks, made up 50.4% of the overall new vehicle market. The six vehicles in the chart below were responsible for 12.2% of all new vehicle sales in the United States in January 2011.