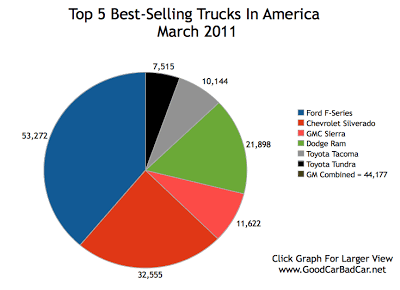 Home
All Vehicle Rankings
Trucks & Vans
Truck Sales
America’s best-selling trucks, setting aside the Toyota Tundra and its 30.3% drop in March, were an even more popular bunch in 2011 than they were in March 2010. Ford F-Series sales jumped 25.3%. GM’s Silverado/Sierra tandem posted a combined 10.9% increase as Silverado sales rose 8.9% and GMC Sierra sales rose 17%. The Dodge Ram was up 22.9% and the Toyota Tacoma vastly out-performed the Tundra with a 7.4% increase.

But there’s something else to keep in mind. The new vehicle market as a whole grew 16.9% from March 2010, making Ford and Dodge’s above average increases even more astounding. Fuel prices are reaching complain-about-them-all-day-long heights, but consumers are still loving them some pickups.

11 out of every 100 new vehicles sold in the United States in March 2011 was one of these six trucks (five, if you count the Sierra and Silverado as one). The Honda Accord and Nissan Altima were America’s two best-selling cars in March. Yet for every Accord and Altima sold in the 31 days of March, Ford and GM sold one-and-a-half full-size trucks.

Check out the Graph below for the important truck sales numbers.