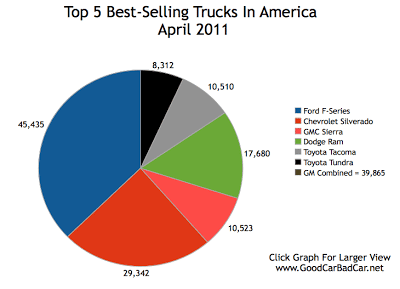 Home
All Vehicle Rankings
Trucks & Vans
Truck Sales
Grabbing one in every four Ford buyers in April, the F-Series (up 11%) ranks as the most important Ford by far despite rising gas prices. More than one-third of all F-150 buyers are going for the turbocharged EcoBoost V6. For context, 5% of all Ford buyers in April chose the company’s fuel-efficient smallest car, the Fiesta.

Ford’s F-Series trucks out-sold the combined efforts of its two GM competitors, the Chevrolet Silverado (down 0.9%) and GMC Sierra (up 12.4%). Dodge Ram sales jumped 29% but still trailed the Silverado and F-Series by huge margins. Further back, the Toyota Tacoma was up 11.7% and Toyota’s full-size Tundra was down 7.1%.

A complete Truck Sales Chart is coming in a few days, but for now, feast your eyes on the figures put up by the Top 5 Best-Selling Trucks in America (six if you don’t link the Silverado and Sierra.) Combined, they owned more than 10% of the overall new vehicle market in April.