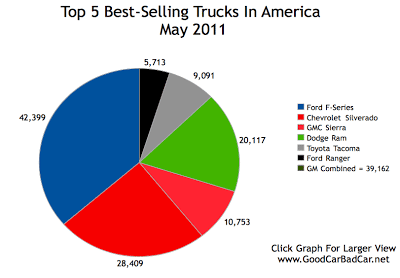 Home
All Vehicle Rankings
Trucks & Vans
Truck Sales
We’ll be taking a deeper look at U.S. truck sales later in the month, just as we did in April, so rather than present a deep analysis of America’s best-selling trucks now, let’s just spread out the facts.

Not surprisingly, the most popular truck in America in May 2011 was the Ford F-Series. Even if you join the Chevrolet Avalanche to GM’s Silverado/Sierra tally, Ford still trounced General Motors by 1991 sales. The F-Series was down 15% in May, however. Ford’s dying Ranger was off 14.1%. Silverado sales fell 15.7%. Sales of the GMC Sierra were down 4.9%.

On the flip side, Dodge Ram sales improved to the tune of a 16.3% song. Toyota Tacoma sales also rose, up 5.3% to 9091. The usual fifth-place truck in this chart (behind the F-Series, Silverado/Sierra, Ram, and Tacoma) is the Toyota Tundra. But Tundra sales slid from May 2010’s 8491 total to just 4307 in the same period of this year.