As already clearly seen, not a single American or American-owned automaker posted improved sales in 2008 over calendar year 2007 in the American marketplace. Could the Asian brands fare any better? Find out below in a Tuesday Top 5.

—–
#5- Kia: 273,397
In a terrible year for automakers everywhere, a 10.5% decline can almost (I said “almost”) be seen as an increase, relatively speaking. Believe it or not, a 10.5% decline in sales means you’re doing a lot better than most brands.
#4- Hyundai: 401,742
Personality Type A in the Hyundai/Kia conglomerate that wants to take over the world before the Chinese manage to do so, Hyundai overall decline of 14% wasn’t stymied by the Genesis’ 6,167 unit-upswing. Hyundai now has ten models in American showrooms.
#3- Nissan: 838,361
Again, falling just 10.9% compared with 2007 really isn’t so bad. Take a deep breath. Forcing the Versa to become the cheapest car in America may not have helped the bottom line but probably kept Nissan from sinking much lower.
#2- Honda: 1,284,261
Bad things aren’t supposed to happen to Honda, right? Back in the summer, the Civic became the best-selling car in America, toppling the F-150 of all things, in monthly sales roundups. Alas, Honda still met the hill that led everybody here except Subaru downward. For Honda, it was just a 6.4% fall.
#1- Toyota: 1,957,575 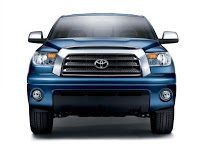 Financially, this was not a good year for Toyota America. On the other hand, Toyota sold more cars, vans, trucks, and SUVs than anybody else in the country. As Tina Fey would say, suck it.
More Top 5 posts from GoodCarBadCar.net
Best-selling European Brands in America
Best-selling American Brands in America
Cubical Vehicles
Car Interiors Under $15,000
Handsome Little MPVs